Connections between Brazil and the United Kingdom 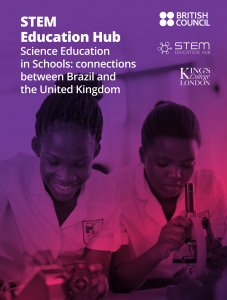 In a town in the outskirts of São Paulo, a teacher invites young students to participate in a study using scientific methodology to investigate lunch waste. They discuss about school meals wastage and move on to discuss the global problem of sustainable food production. On the Brazilian coast, a teacher makes connections with the United Kingdom. The teacher brings together students and various actors from the municipality of Santos, including government agents, in a project that aims to preserve marine life, as part of the local activities celebrating The Ocean Decade. In Goiânia, capital of Goiás, a teacher takes black scientists to the classroom to tell their stories and challenges the traditional curriculum of Chemistry – racism and the frequent invisibility of non-Eurocentric cultures in science. In Rio de Janeiro and London, researchers project connections between schools to expand the horizon of teaching science. 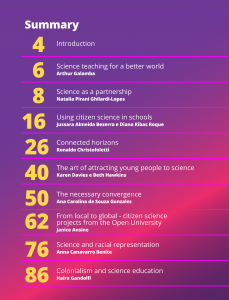 These are some examples of inspiring projects showcased in the e-pub Scientific education in schools: Connections between Brazil and the United Kingdom. The e-pub is an output of the project  STEM Education Hub, run in partnership between The British Council and King’s College London. It contains articles from educators in the UK and Brazil on contemporary topics relevant to science teaching in the two countries, which are drawn on a series of lectures that took place online at the STEM Education Hub. In this publication, you will find out researchers’ findings and how they envisage new approaches to science teaching. The e-pub is in digital book format, offering links to enrich reading, new ideas and approaches, within the broad concept of critical pedagogy.

It is the critical thinking of teachers that create a more inclusive education, with a special focus on actions that encourage girls and, more markedly, black girls, to discover and take possession of all their potential for action and creation.

Watch here the event recorded with authors of the e-book

Lots of Ways to Get Involved.